Greenhouse/glasshouse technology developed largely in the Netherlands over the past 150 years might be considered one of the immediate ancestors of today’s vertical farms. The proportion of the world’s crops being grown under some kind of protected culture (also referred to as controlled environment agriculture) has risen dramatically over the past 20 years, as illustrated by the growth in area in the United States shown in Figure 1.1 below. This illustrates not only the strengths of these production practices (especially higher yields per area), but also a growing level of technical know-how and a concurrent decrease in the costs of indoor farming technologies. The situation in Canada parallels that of the U.S., with growth in greenhouse area leveling off in recent years after strong growth in the early 2000s, which was also driven by changing consumer preferences for greenhouse-grown tomatoes.

Greenhouse vegetable area in Canada is estimated at approximately 140 million square feet in 2015, with approximately 75 percent of the area concentrated in Ontario and British Columbia. Approximately half of Canada’s greenhouse production consists of bell peppers, with most remaining space devoted to tomatoes (25%) and English cucumbers (10%).

U.S. greenhouse vegetable area is estimated at 95 million sq ft., with about 45 percent of the total concentrated in California and Arizona. Approximately half of this area is devoted to tomatoes, with the remaining categories distributed as shown in Figure 1. 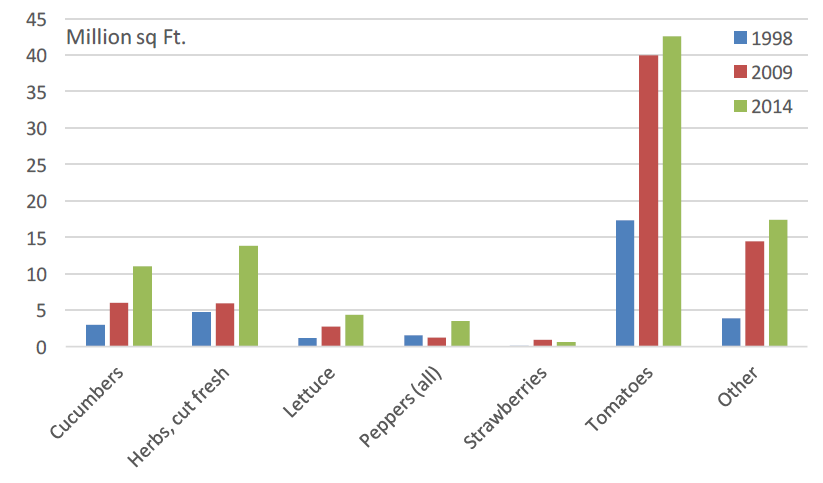 The development of greenhouse agriculture has set the stage for vertical farming, considered by some to be the next stage in the evolution of agricultural production. Advancements in technology and growing practices have been driven by market factors, such as the popularity of greenhouse-grown tomatoes with consumers, adapted from other sectors, such as commercial and industrial lighting, and, in the case of cannabis (until recently), the need to grow in clandestine, compact, climate controlled environments.

Another similarity between already-established greenhouse production and vertical farms is the similar range of crops grown: predominantly leafy greens and herbs. The market situation will be addressed in later sections of this report.

Also driving the growing feasibility of indoor/vertical farming is the under-appreciated (until recently) development of “plant factories” in Asia over the past 30 years. Referred to more formally as Plant Factories with Artificial Lighting (PFALs), these facilities are quite numerous in east Asia (over 500, according to a recent estimate by Newbean Capital). While their overall contribution to food production in these countries is relatively small, their numbers have been increasing rapidly in the past decade. In addition, PFALs have provided an important learning environment for new production systems and automation, and more recently, companies with experience in Asia are now gearing up to supply international markets with growing technologies.

It also bears to mention the advocacy of futurists such as Dickson Despommier, a Professor of ecology at Columbia University and founder of the Association for Vertical Farming (AVF). Nearly ten years ago, through a series of articles aimed at popular audiences, Despommier and others laid out a vision for vertical farming that is emerging, largely intact, with today’s enterprises.

Consistent with definitions used elsewhere (e.g., Newbean Capital, AVF), we define vertical farms as operations started in the past ten years that share most of the following characteristics:

Based on a lack of representative operations in the market, commercial scale aquaponic (a closed-loop combination of hydroponic and aquacultural systems that produce leafy greens and tilapia or other freshwater fish species) are not included in this analysis. Also not included are systems designed for home or personal use.

The combined attention to high-value segments (food, biopharma, and cannabis) have accelerated technology and know-how to the point where start-up operations in any of these segments can reach commercial scale production in a short period of time, given adequate capital and expertise (complications such as dealing with urban land reuse are addressed in Part 2).

Some of the key developments in the North American vertical farming segment include:

Unless economic fundamentals change drastically in the coming years, indoor growing is not likely to be used for certain crops, such as grains, forage, and tree fruit. Nonetheless, there is a consensus among many observers that vertical growing methods will continue to expand their footprint over the next decade.

The specific ventures profiled in this study combine these elements in different ways, and often include their own unique elements, such as hiring only from the local community, or only building on rooftops, or combining growing operations with retail, research, or educational activities.