While medical cannabis has effectively been legal in Canada since 2001, it wasn’t until sweeping revisions to federal policy in 2013 that the stage was set for a rapid nationwide expansion of the legal commercial cannabis industry.

The Marihuana for Medical Purposes Regulations (MMPR) permit the cultivation and sale of traditional dried-and-cured cannabis and cannabis oil by a limited number of licensed producers to serve the nation’s medicinal market.

According to Health Canada statistics, medical cannabis sales (dried only – oil sales did not officially begin until October 2015) totaled 6,704 kg in calendar year 2015, with an estimated market value of $53.6 million (all values are Canadian dollars unless otherwise noted). This figure belies the tremendous growth since the government began reporting sales in June 2014, as shown in Figure 3 below. The sales growth closely follows the increase in the number of registered clients, which stood at 53,649 at the end of March 2016. 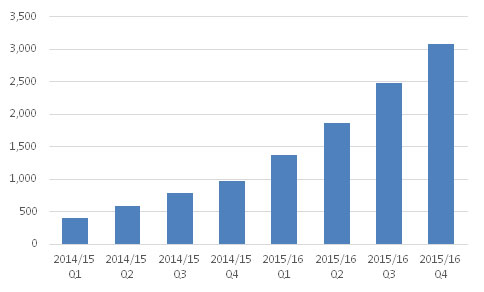 Health Canada reports industry projections that the total number of registered medical users will total 450,000 by 2024. This would require roughly 49,000 additional registrations per year, which may be realistic considering the 23 percent quarterly growth rate over the past two years. Taking these projections as a given, the annual market for medical cannabis products would total roughly $1.4 billion, not counting price increases. We will examine these market trends in more detail in Part 2 of this study.

While this report focuses on medical cannabis, the year 2017 is likely to prove to be a pivotal one for the cannabis industry, as the government of Canada prepares a full scale decriminalization of cannabis in the country. We will relay some of the emerging thoughts on the direction of the industry if and when this comes to pass.

The existing players in the medical cannabis cultivation industry have been expanding at a dramatic pace over the past two years, investing hundreds of millions of dollars in production space, which consists of high-end greenhouses as well as high-density indoor growing operations.

Compared to indoor-grown fresh produce, the medical cannabis and pharmaceutical crop markets are relatively more focused, due to a combination of regulations and industry practices that limit the type of viable business models at the moment. Currently, the only options available to Canadian cannabis producers are the cultivation and/or mail order sales of dried product and oil. This has prompted producers to differentiate themselves through the development of new strains, the acquisition of information service firms (such as the purchase of CanvasRx by Aurora Cannabis), fine tuning logistics and delivery services, or by developing export markets (medical cannabis can be sold internationally if the receiving country also permits medical use).

For the purposes of this study, medical cannabis market potential is currently limited to Canada, due to complications related to the continuing status of cannabis as a highly regulated Schedule 1 drug in the United States. Demand is shown at the province level, based on the estimated number of registered medical cannabis patients in each. Canada has been more forward thinking in its nationwide approach to cannabis regulation than some other countries, and as such the rules for patients and growers are the same in each province. Adding to the uniformity is the requirement that all medical cannabis be shipped to customers, which has created an active online market for producers to provide detailed product information and other services to clients.

Given the current cannabis marketing constraints in Canada, firms have still responded to customer needs by providing additional services, such as detailed product information and professional  customer service.

Operating models are currently limited to cultivation, sales, or both. As long as this remains the case, firms can benefit from investing in technology, process design, and training, with an eye on reducing production costs and optimizing the logistics side of their operations.

While cannabis products themselves are also limited, firms differentiate themselves in other ways, through the development of new strains, providing educational and informational services, and easing the transaction process.

Partnerships also have the potential to help companies generate higher returns, provide access to funds (such as grants) that may not be available to the private sector, enter the market with higher visibility, and access emerging technologies earlier than competitors. In some cases, provincial governments may be interested in supporting development of local cannabis operations as a jobs-creation strategy, similar to recent developments in New Brunswick, where a supplier received $4 million in incentives to open a medical cannabis facility in the town of Atholville.

There still appears to be an operating window where the limitations on legal cannabis sellers and the strong growth in demand can provide suitable returns to sellers who have successfully navigated the licensing process.

In addition to a number of the suppliers listed in the vertical vegetable farming report, there are additional companies working on greenhouse cultivation systems that are targeting cannabis growers:

As long as the range of medical cannabis products are limited by law to dried-and-cured and cannabis oil, it will be difficult to define emerging niches. While we will not attempt to prognosticate on the legislative proposals to legalize recreational cannabis in Canada, the government’s policy approach being taken for legalization aims to:

“Establish and enforce a system of strict production, distribution and sales, taking a public health approach, with regulation of quality and safety (e.g., child-proof packaging, warning labels), restriction of access, and application of taxes…”[1]

Based on this statement, and the cautious approach already taken with the medical market, we expect government leaders will attempt to avoid some of the perceived mistakes that occurred after voters in Washington and Colorado legalized recreational use in those states, such as public health and safety concerns related to edible products, as well as sales taxes that, in Colorado at least, hampered the growth of the legal market.[2] Presumably, this is not good news for the dispensary-type operations currently operating in some Canadian cities.

Size and growth of each segment

The estimated size and growth rate of the medical cannabis market are reported in Table 11, below:

Source: Based on Health Canada projections

The profitability of the medical cannabis market is summarized in Table 12, below.

The situation in cannabis is also straightforward compared to the food sector, as sales are direct to the consumer. While individual growers and sellers may make supply arrangements between themselves, this is likely to be on an ad hoc basis, and as with pharma crops, there is no strategically important sector in the middle of the supply chain.

Most of the available information about Canada’s medical cannabis producers comes either from filings of publicly-listed companies or from investor pitches, so this information must be taken with some amount of skepticism. We assume that the reported topline numbers – sales revenues, pricing, and customer counts – are mostly accurate when referring to quarterly performance. In every case we examined, companies reported double digit sales growth in every quarter over the past year, though these figures are notably lower than what these same companies were forecasting in 2015.

Firms are taking various approaches to the market, given the regulatory limitations. These might be broken down into a few categories:

Other elements of marketing strategies include pricing – including discounts for medical users facing financial hardships – and indirect promotion via industry media.

Pricing strategies are subject to a number of factors: first, what the market will bear on the high end, and second, how producers can sell lower priced product and still remain profitable. In one investor pitch, a startup company stated its desire to pursue the high-value market, claiming this was because product development costs are the same no matter how “desirable” a strain may be.

This is a mistaken assumption. Higher priced product, almost by definition, is going to represent a smaller market. Depending on the price elasticity of consumers (based on the availability of substitutes as much as the perceived quality of that company’s strains), higher prices may simply drive demand to other sellers. The lesson is that a high-end strategy can work, but this requires significant additional investment in R&D, consumer research, and brand development.

Unique value proposition/advantages may include a wide availability of strains, superior customer service, and related items like quality control/purity, and organic production methods. Since the product space is limited to development of strains for the moment, companies with active breeding programs or partnerships with breeding companies will have an advantage over those relying on non-proprietary varieties. Given the high costs of the new generation of growing systems, it may be a short leap to obtain organic certification, though soilless systems do not currently qualify for organic certification.

Strengths and weaknesses are difficult to determine, due to the tightly-controlled nature of information about firms, but some publicly-available information may allow some inferences. These are grouped into the following categories:

Profitability – today and tomorrow. As discussed earlier, there are a number of warning signs about the future profitability of medical cannabis – and cannabis in general. First and foremost is demand growth. Current growth trends in registered patients are strong, as described in Part 1A of this study, but must continue at these same rates for the next decade in order to meet the forecasts from a few years ago. It will be difficult to know whether this trend will continue or not for another year or so, as new patient data are reported by Health Canada. If the most of the latent demand has already entered the market, then we would expect growth to slow considerably compared to expectations. The number of announcements dealing with production scale backs and companies backing out of deals in recent months seems to suggest that the demand picture is not as positive as some initially thought.

Some firms, such as Aphria and OrganiGram, appear to be profitable today, while others, such as Tweed, are still operating at a loss but could be profitable at higher sales levels. Still, the market risks (i.e., sluggish demand) must be noted.

A second warning comes from the sheer amount of excess supply the market is capable of producing. Inventories ballooned over the past two years as producers were licensed and entered the market. This is reportedly easing somewhat as demand catches up with supply, but cannabis is still a perishable product and a perception that “old” product is in the pipeline could have a detrimental effect on pricing. A much larger concern in the long term is the amount of expansion space already available. A recent report stated that Canadian production space for cannabis is approaching one million square feet. Buried in the same report is a chart suggesting an expansion area of nearly 2.8 million square feet.[3] While all of this area cannot be mobilized overnight, the mere existence of this space in the hands of existing players should be a cause for concern for those still seeking licensing.

One final comment must be made related to the eventual legalization of cannabis in Canada: based on the experience of U.S. states that have legalized recreational use, there could be considerable downside risk on cannabis pricing. Firms that are clearing substantial profits at a price of $8 per gram must plan to also be profitable when prices are closer to $4 per gram. It is not clear that this is the case, as the following section explores.